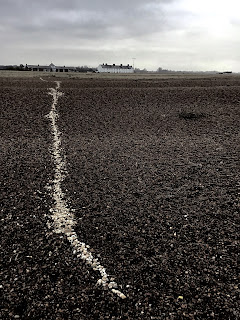 How many shells make up the Shingle Street Shell line?  A question which did not occur to me when, on resuming my Christmas Day Adventure Tradition, I journeyed to the sea shore of Suffolk to experience The Shell Line which runs from the Shingle Street Coast Guards Cottage, to where the Shingle meets the sea.

The narrative, as the foundation of The Shell Line, comes from the lived experience of two individuals.  The creative act of forming this line, is documented as one that evolved organically and somewhat spontaneously.  Since its inception, in 2005, two days a year the two individuals return to the shingle beach.  Spending time together, they heal sections of line which have been altered, shifted, interrupted by the sea, wind, walkers, dogs, birds.

My own walk began from the carpark by the Coastguard’s Cottage.  Unconscious of any preference as to how I might meet  the Shell Line, I did not head straight for the beach, instead, I walked along the footpath behind the row of the four cottages towards the Martello Tower.  Walking along the footpath towards the shingle beach, I stopped to read the notice board which informed me as to this Area of Outstanding Natural Beauty.  There was no mention of The Shell Line.  Turning toward the sea, the wind properly pounded my body, providing that gratifying sense of being present in nature.  Indeed, whilst there were no clouds dramatically racing across the sky, or high waves pounding the shore, the power of the wind was unrelenting.  This, partnered with the demands of walking on shingle afforded, what I would feel at the end of the walk; a sense of satisfaction from having encountered and successfully navigated, challenges to both body and mind.

Turning to walk parallel to the horizon I caught, out of the corner of my eye, a first glimpse of The Shell Line; the presence of which caught me unaware.  Although in the distance, the contrast of colours; the whiteness of the shells embedded in the vibrant autumnal colours of the shingle, exposed a powerful portrait of human endeavour.  On moving toward viewing it more closely, I instinctively stopped to collect some of the white whelk shaped shells sprinkled across the shingle.  Thus, on arriving at The Shell Line at the point where it connects with the sea, I laid a further seven shells and then looked inland along the line stretching toward the distant row of houses.

I walked the length of the line, and then for a further two hours, following the shingle edge along the Suffolk Coast pathway towards Orford, turning back at Barthorp’s Creek.  I stood atop the shingle ridge, arms outstretched leaning Titanic like into the wind.  I talked myself, out loud, through the traumatic events of my 2021 year.  I sat on a bench, drank tea from a tea flask.  I reflected on this Christmas tradition that has become mine – the result of a life changing event.  And once again the process, and power, of adventure enabled me to  reboot, enabled me to standalone, enabled me to dance my dance.

I began these ramblings by asking a question I had not even considered prior to, or during, my adventure.  The Shingle Street Shell Line, as one borne from a very real human story, is a metaphor for life.  Subsequently I ask myself what brought me to the point of asking such a facile question.  I sense the answer is a confluence of: looking to find an angle from which to write, and revisiting pages of the tea talk diaries and observing numbers as a dominant feature of the writing/projects.  Furthermore, aspects of life, and thus the days and headlines of these days, seem to have become dominated by numbers and statistics.

Fact: on the cusp of 2021 becoming 2022, and in the shadow of the Omicron variant, Christmas Eve 2021 saw the number of people registering a positive COVID test reach a daily high of 122,186, in the UK alone.

As such, I could excuse short comings by concluding that a degree of subliminal conditioning has been taking place.  However my preference is to avoid any such reprimand, and settle on a perspective that The Shingle Street Shell Line transcends the two particular personal narratives at the heart of the project.  Intrinsic to, and held within, this line are billions of past, present and future narratives. And thus, integral to my question, is how the experience of walking The Shingle Street Shell Line along the coastline of Suffolk, resonates within.